Women empowerment is not something that should be limited to theory, it must be put into action as well.

Even though it is quite normalized in other countries, Menstruation is a topic that is seldom discussed is south Asian countries, especially like India and Sri Lanka. It is considered a taboo, even shameful among some communities to openly talk about menstruation. The myths that are surrounded, fear of being looked down upon by the society makes most women reluctant to talk about the issues they face regarding periods. To add on to that, due to the high taxes on sanitary napkins in Sri Lanka, most women aren’t able to afford it, making them prone to bad health issues as well.  Taking a first step in eradicating period poverty, the Rotaract Club of Kandy, along with the Rotary Club of Kandy took the initiative to execute the Project Stand for Her, where reusable sanitary napkins worth 100,000 LKR were donated to the young students in Sobhitha Maha Vidyalaya, Heenuggala. It was an eco-friendly, sustainable project where the napkins provided are expected to be used for some years come. The kids were also educated by the club members so as to how to use the sanitary napkins. Intending to continue with this project every year, the club is very much satisfied that we were able to make a difference and take a stance in changing the lives of some students in the smallest way possible. 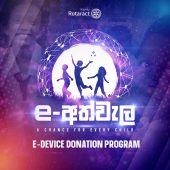